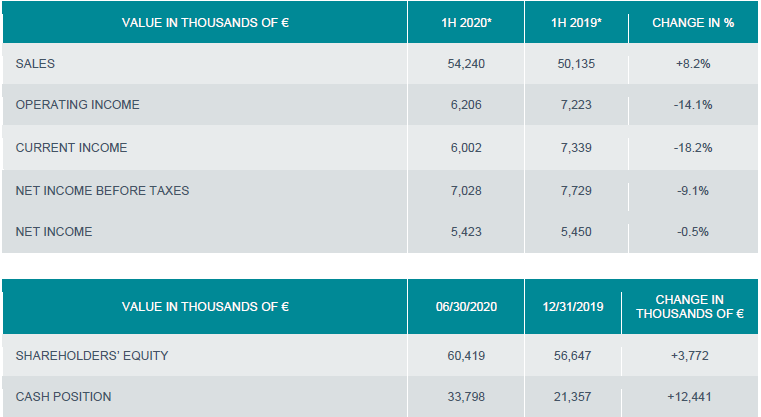 RESILIENCE DESPITE THE PANDEMIC

Esker’s 2020 half-year sales revenue grew 8%, driven by the continued success of cloud-based solutions (+11%), representing 92% of total company revenue. This performance combines two strongly contrasting quarters.
Despite confinement measures put in place in several countries in March, Q1 2020 confirmed Esker’s growth momentum, established over the past years. Revenue increased by +16% in Q1 (+21% for cloud-based activities). In Q2, the COVID-19-driven economic slowdown strongly impacted the variable share of the company’s sales revenue that depends on the level of customer activity on its platforms. The impact on this variable share reached 24% in April and May on 45% of revenue. During this period, the fixed subscription portion invoiced to customers (23% of revenue in 2019) lessened the impact. Q2 revenue was therefore stable, with a slight growth in cloud solutions (+2%). This performance reinforces the company’s objective to prioritise the subscription component in its revenue to protect itself from further economic fluctuations.

The economic situation also delayed the closing of new deals at the end of Q2. Despite this impact, the cumulative value of new contracts signed in the first half of 2020 increased by 3% compared to 2019, to reach 12 million euros.
Maintaining profitability and controlling investments

The COVID-19 crisis came as Esker anticipated another year of strong revenue growth, in line with 2019 (+20%). Despite the situation, the company decided to maintain the investments it had already made while controlling its expenses. Esker demonstrates its desire to control its financial results, without limiting its ability to regain dynamic growth in future years.

Average employee numbers this half-year were up 14% compared to the first half of 2019. This increase is slightly lower compared to the effort made in 2019 (+18%). This reflects the will to continue to serve its customers with no compromise on quality, but also allows the investments necessary for the pursuit of strategic development. Efforts focused particularly on the R&D (+19%) and consulting (+14%) departments. The investment in personnel was partly offset by the control of other expenses. For the first half of 2020, total operating expenses increased by only 12% compared to 2019. Operating income came to 6.2 million euros, down 14%. Profitability remains at 11.4% of sales, despite the impact of the pandemic on Q2.

Esker decided to take advantage of the favorable tax regime traditionally reserved for profits derived from the exploitation of patents (known as the Patent Box), which was recently extended for French companies to software activities. The company thus benefits from its constant commitment to maintaining the vast majority of its investments in software development in France.

For the first half of 2020, the impacts are twofold. The retroactive application of the new tax system to the 2019 financial year generates a decrease in tax expense of 0.8 million euros net. This gain over the previous financial year was classified as exceptional income. On the other hand, the effect on the 2020 results leads to a decrease of four points in the effective company tax rate (27% compared to 31% in the first half of 2019). The corresponding tax charge therefore fell from 2.3 million euros to 1.6 million euros.

Interest income/loss declined due to slightly negative currency impacts for the first half of 2020, as well as unfavorable market conditions for the company’s cash management. Additionally, the share of profit attributable to Esker in the joint venture with Quadient declined significantly, mainly due to the impact of the crisis. Net income rests at 5.4 million euros, stable compared to the first half of 2019.

Esker has benefited from the French government’s economic support measures in the form of state-guaranteed loans of 11 million euros. These loans bring the company’s total debt to 16.6 million euros, compared to shareholders’ equity of over 60 million euros. This financial strength will enable the company to seize attractive opportunities and ensure its regular operations during this period of crisis. As of June 30, 2020, company cash rests at 33.8 million euros, up 12 million euros, of which only 8.7 million euros came from financing activities.

The first half of 2020 demonstrates the resilience of Esker’s cloud business model. The gradual economic recovery should make it possible to progressively regain the company’s growth rate before the crisis. Depending on the global pandemic evolution and any protective measures taken by governments, Esker expects 2020 growth close to 9% (excluding currency fluctuations), with stable profitability compared to 2019. The lifting of protective measures in the world’s major economies and the enhanced relevance of Esker's cloud-based solutions during a pandemic should also result in an increase in signed contracts in the second half of 2020 and the start of the 2021 fiscal year.